A brief summary of my visit to the 2012 Professional IT Community Conference (PICC'12) in New Brunswick, New Jersey on May 12th. As mentioned in a previous posting, this is a small, regional IT and system administration conference run by the New Jersey chapter of the League of Professional System Administrators - LOPSA. It's relatively new - this is only the 3rd time it's being held, but attendance was up significantly this year - about 125 attendees, compared to roughly 80 in each of the previous years.

The conference took place on Friday and Saturday, May 11th-12th. Having too many important meetings at work, I had to miss the various sessions on Friday, including unfortunately, the evening keynote by Bill Cheswick on "Rethinking Passwords". I'm pretty sure I've seen a previous version of that talk though, that he gave at Penn's Distributed Systems Lab a few years ago. Actually, I've been thinking and rethinking passwords for years myself, and have many thoughts on the subject, but I'll leave those for a future post. A version of Ches's talk appears to be online at his website. Next year, I hope to attend both days of the PICC conference.

I took the train from Philly early Saturday morning and arrived at the conference venue, the Hyatt Regency hotel in New Brunswick, at 8:30am. My primary agenda for the day was to give two half-day tutorial/training classes on IPv6 and DNS/DNSSEC.

First up was IPv6 (9am-12:30pm). I delivered a revised version of the IPv6 class I taught at the USENIX LISA 2011 conference in Boston in December. Actually, I taught the IPv6 class at PICC last year too, but I was called in at the last moment to do it, and essentially scrambled to put together a set of slides at very short notice. Although that talk was also well received, the LISA talk and this newest revision is a much more thorough and carefully thought out set of slides and material. The class assumes basic knowledge of TCP/IP networking, and goes from IPv6 basics all the way to relatively advanced topics and touches on some of the latest developments in IPv6 too. Some of the slides cover more material than I actually have time to discuss in detail in such a short course. But they are useful as reference material that can be consulted later.

(Actually, I could easily reuse this same slide deck for a full-day or multi-day course ..)

I had about 25 to 30 attendees, which is a pretty good turnout given the number of competing tutorials and sessions. And they were engaged, asking lots of questions. There were several repeat attendees at my talk from the previous year, so I must be doing something right! :-) If you follow me on twitter, you probably already know that I was presented with an IPv6 Buddy (apparently "the essential tool for IPv6 engineers") by Willard Dennis: 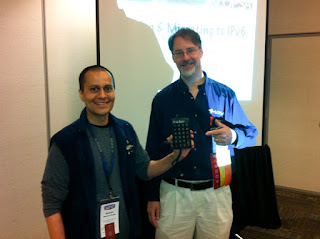 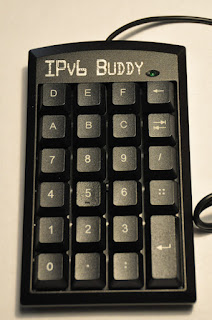 The IPv6 Buddy is a USB keyboard to make it easier to type IPv6 addresses. It has keys for all the hex digits, a double-colon ("::") key, and even a period for entering IPv4-mapped IPv6 addresses. It's cute, but the novelty is already beginning to wear off. It will continue to be a nice conversation piece for my office though (not that I don't have enough toys in my office already)!

The afternoon's DNS and DNSSEC class had a similar turnout, and went quite well too. Again, I had a pretty engaged audience, asking lots of questions. This is a new course that I very recently finished designing, and that I delivered for the first time at this conference. Naturally, I'm very interested in feedback on the material. The slides are available here:

I attended the Saturday evening ending keynote, by Rebecca Mercuri, on "The Black Swan and Information Security". Rebecca got her Ph.D. in Computer Science from Penn actually, and is well known for her work in electronic voting. This was an interesting talk, suggesting correctly I think, that the theories in Taleb's book of that name, have very strong parallels in IT and Information Security, and that Black Swan style outlier events are perhaps more normal than people believe. I was also pleasantly amused to hear her make a reference to my DNS talk when discussing risk analysis (specifically the part where I had discussed the pros and cons of routine key rollovers in DNSSEC - see my slides for details).

If I had more time, there were several talks/sessions I would have like to attend. One of these days, I will finally figure out how to find the time to attend Tom Limoncelli's "Time Management" class, but how can I solve this perplexing catch-22! :-) Willard Dennis did a class on GNS3/Dynamips/Dynagen - I'm interested because I use dynamips and dynagen extensively in a class at Penn's Engineering School: TCOM504, where I teach students about routing protocols (IPv4/IPv6, RIP, OSPF, IS-IS, BGP, Multicast, MPLS, etc).

I took the train back to Philly, arriving home around 8:45pm. It was a long but productive day. PICC is a very nice conference. I hope it grows and continues to be successful.