I'm in (so called) Paradise

[Actual date for the photos in this article: Saturday, January 12th 2013]

My colleague, Richard Machida (U of Alaska, Fairbanks), has been blogging from Hawaii, so I felt motivated to do the same. I'll post follow-up articles for each day of the conference.

I'm in Oahu, Hawaii to attend the Winter 2013 Joint Techs conference, hosted by the University of Hawaii in Manoa. Joint Techs is billed as an international conference of networking experts - and is one of the primary technical conferences for the US Research & Education networking community. Whenever in Hawaii, this conference conveniently changes its name to "Techs in Paradise". Also when in Hawaii, it is usually co-located with the APAN (Asia Pacific Advanced Network) meeting - APAN is the Asia Pacific's R&E network/organization. This time, a new format is being tried with a fully merged Joint Techs/APAN conference. As a result, we have quite a large attendance - almost 500 people, stressing the conference facilities a bit.

I chose an aggressive flight schedule that had me leaving Philly at 6:30am and arriving at 1:30pm in Honolulu, if I made the 32 minute (!) connection in San Francisco. Thankfully I did, so I had some daylight to walk around Waikiki a bit and take some photos.

Weather on Oahu so far has been sunny with periods of rain, and temperatures reaching the high 70's (farenheit). Temperature forecast from the local news: 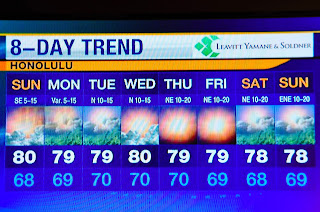 Here are some photos from my flight and from around Waikiki. The complete and growing set, which includes photos from the TIP2013 conference too can be seen on my Google Plus album.

An aerial shot of the Golden Gate bridge and the Presidio Park, from my flight out of San Francisco, shortly after take-off. 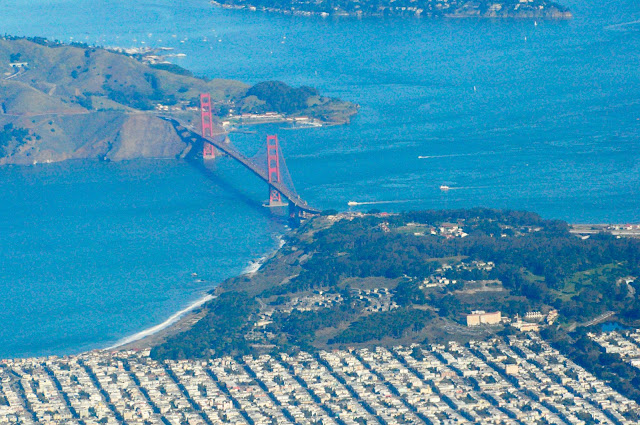 Some aerial shots of Oahu from my flight into Hawaii. The first shows a portion of Eastern Oahu including the Mokapu peninsula and Kailua. If I was on the left side of the plane, I might have been able to get a few photos from directly above Diamond Head, but I saw a lot of clouds in that direction, so it may not have been visible (I have some good shots of that side from a previous trip which I might post later). 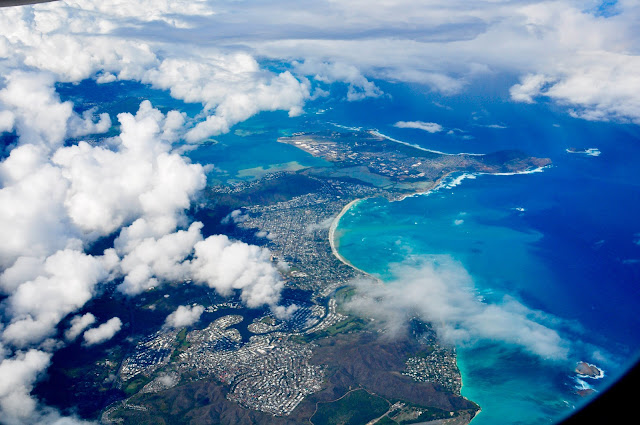 The following photo is from directly above Waikiki beach (a detailed crop of a larger photo I took). A large part of Waikiki, Waikiki Beach, and a portion of the Ala Wai canal (which diverts mountain stream water around Waikiki) can be seen. 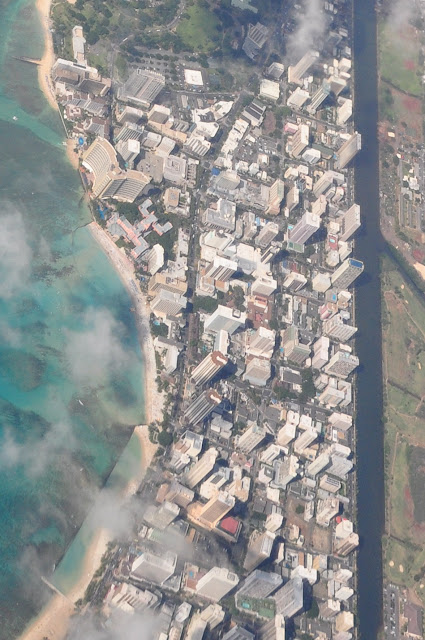 Diamond Head, probably Hawaii's most famous landmark, is a dormant volcanic crater, created by a relatively recent eruption (ie. geologically speaking; 150,000 years ago). The south western tip, the highest point of the crater rim stands 761 feet high. It's possible to hike all the way to the top (which I've done several times before). 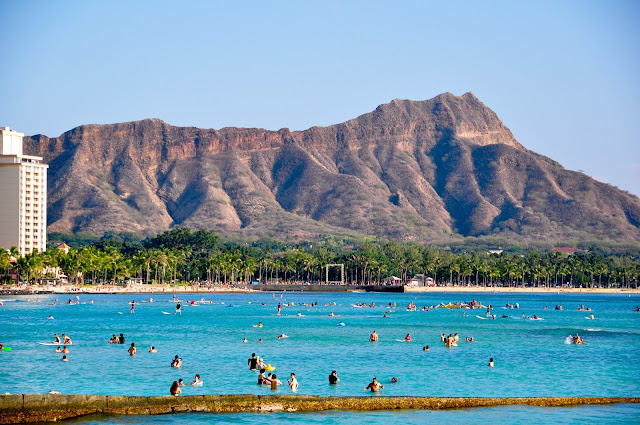 Another view from Kapiolani Beach Park (a much more tranquil place than Waikiki Beach):

The conference hotel is the Sheraton Princess Kaiulani, which is about a block from the beach. I got upgraded to a "partial ocean view" room due to my SPG gold status, but it isn't really much of a view: 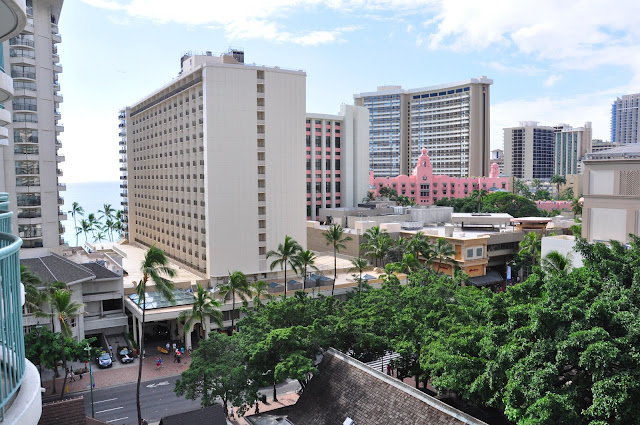 At the last TIP (2008), we occupied a swankier hotel, the Sheraton Waikiki, which was right on the beach, and where I also got upgraded to an ocean view room. Here's a photo from my room at that time - it was designed so that you could seen Diamond Head while you showered from the bathroom (top half of shower curtain was transparent), which was a bit weird. The Sheraton Waikiki has since become even more upscale and I'm told its prices are now out of the range of Joint Techs. 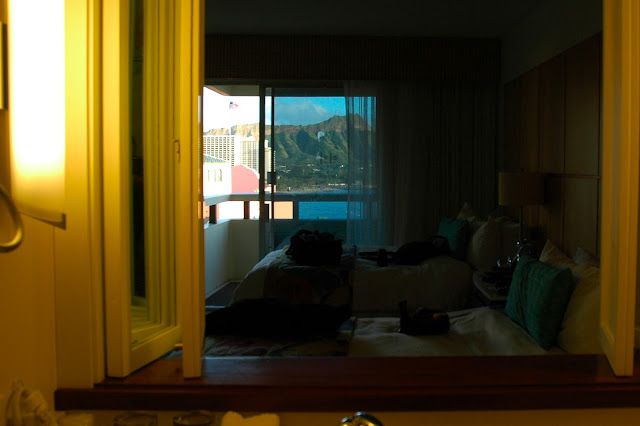 A few other photos: 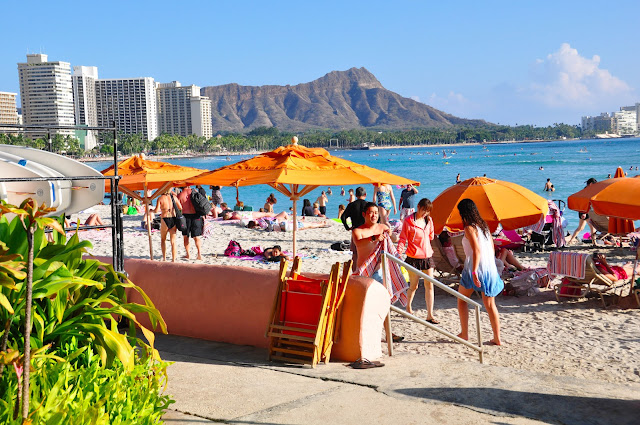 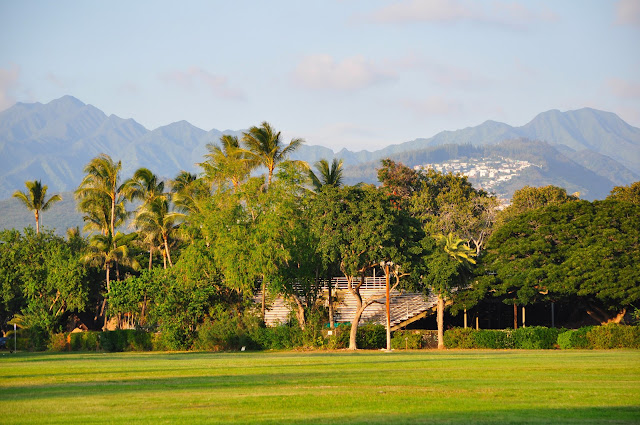 Link to rest of photos.